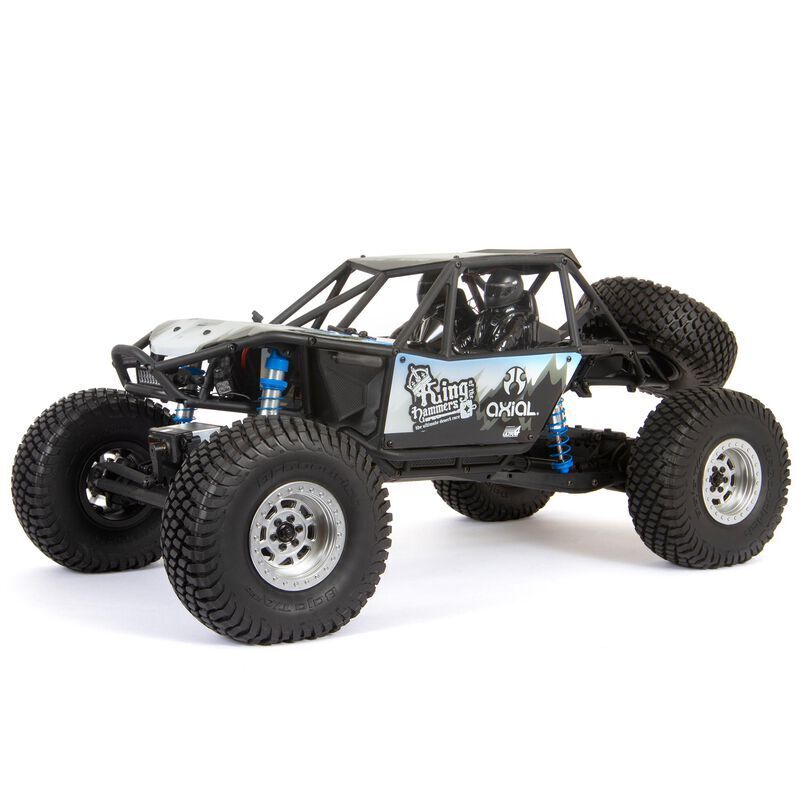 Axial® celebrates the success of both King of the Hammers and the RR10™ Bomber 4WD rock racer with this highly sought, limited edition collector’s rig! Its special livery pays tribute to last year’s winner, Randy Slawson, and to all past KOH winners.

LIMITED EDITION KOH TRIBUTE VERSION — GET YOURS BEFORE THEY’RE GONE!

King of the Hammers (KOH) has become one of the world’s premier off-road races since its 2008 debut, attracting hundreds of teams and tens of thousands of spectators every year. The Official Radio Control Vehicle of the event is none other than Axial® Racing! Now Axial® proudly introduces this limited edition version of the RR10™ Bomber 4WD RTR that features a special KOH livery. It’s a must-own for Axial® enthusiasts, RR10™ Bomber fans, KOH followers, and anyone who appreciates the best in scale or full-size rock crawling and racing!

The Axial® RR10™ Bomber Limited Edition King of the Hammers rock racer captures the unique spirit and style of this amazing annual event in livery created especially for this release. One highlight: On the roof, Axial® has screen printed the names of all past KOH winners, with an emphasis on Randy Slawson — the reigning 3-time KOH champion and the owner of Bomber Fabrication.

True, 4-wheel drive-locked differentials are included for dependable traction. The offset pumpkin of the AR60 OCP-Axle™ increases ground clearance and provides a better driveshaft angle. Thanks to the forward-mounted, easy-access battery tray, you can access the adjustable battery compartment simply by removing two body clips to release the front hood. The compartment offers plenty of room to secure 2S or 3S LiPo batteries.

The included Spektrum™ DX3™ radio uses exclusive DSMR® technology for superior range, response, and interference resistance. The DX3™ transmitter’s integrated thumb steering option makes it possible to steer one-handed safely and precisely. Both the transmitter and the supplied SR315 3-channel receiver are fully compatible with Spektrum™ Smart technology. The 15kg Spektrum™ S614 servo includes metal gears and a metal servo horn for strong, reliable steering. Like the receiver, the servo is waterproof for running in any conditions, rain or shine.

Only 1000 units of the Axial® RR10™ Bomber Limited Edition King of the Hammers rock racer are being produced. Get yours before they’re gone! 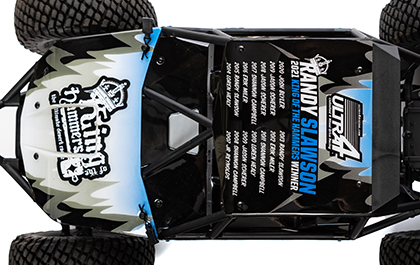 The RR10™ Bomber Limited Edition KOH rock racer captures King of the Hammers spirit and style in a unique trim scheme (body panels and decals) created just for this release. One highlight: On the roof, Axial® has screen-printed the names of all past KOH winners, with an emphasis on Randy Slawson — the reigning 3-time KOH champion and the owner of Bomber Fabrication. 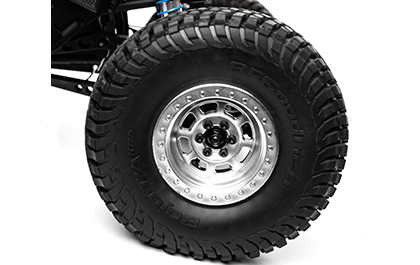 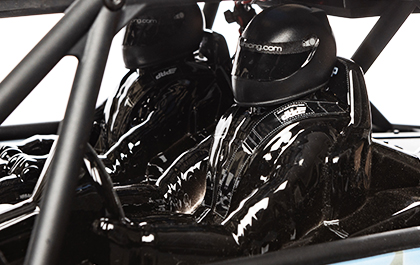 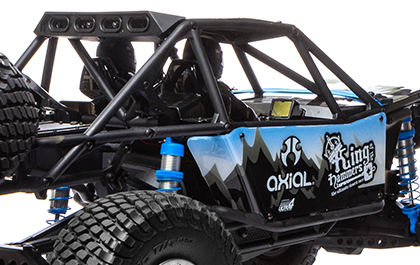 The Axial® Bomber has proven to be fast and indestructible, with the fastest and most widely recognized tube chassis in RC off-roading. Its high-strength composite plastic is engineered to withstand the hard knocks of rock racing. 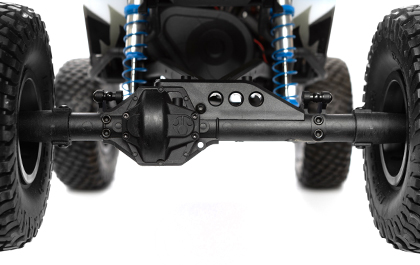 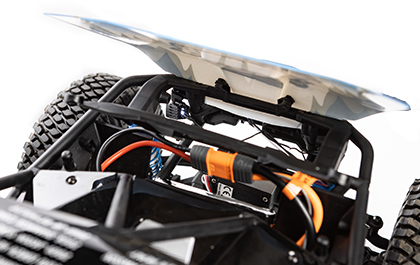 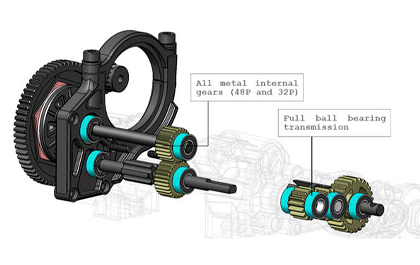 With all metal internal gears, the full bearing transmission endures the harshest rock racing environments. The factory gearbox comes as a single speed, with the high gear installed. The integrated motor mount allows endless gearing options. The dual slipper uses a pad on each side of the spur gear for added surface area and more precise tuning and holding power. The spur gear features strong, 32-pitch gearing for high-torque applications. An optional two-speed transmission component is sold separately (AX31181 / AXIC0999). 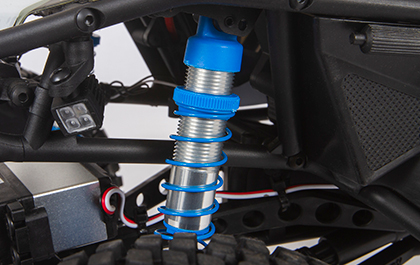 The included aluminum King/Fox shocks feature precision-machined pistons which offer smooth performance throughout the range of travel. Made to tight tolerances, these aluminum shocks feature clear-coated, polished aluminum bodies and are threaded for quick ride height adjustments and pre-load tuning ability. The rear shocks are mounted on the links rather than at the axle, allowing for more suspension travel and better high-speed handling. 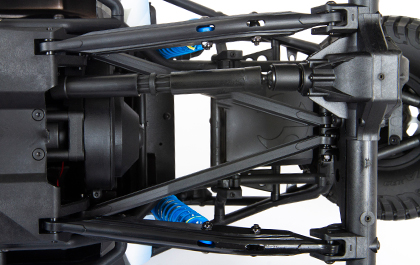 The suspension geometry uses a 4-link design which is optimized to reduce axle steer and to provide the proper anti-squat and roll characteristics. The 4-link system also aids against suspension wrap-up in high-power applications. 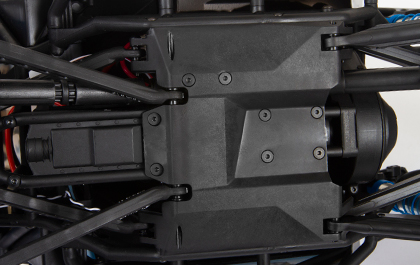 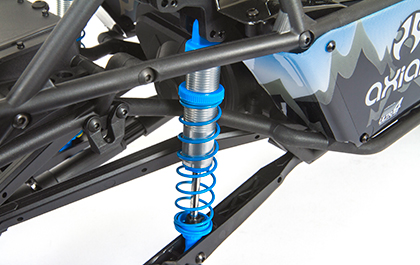 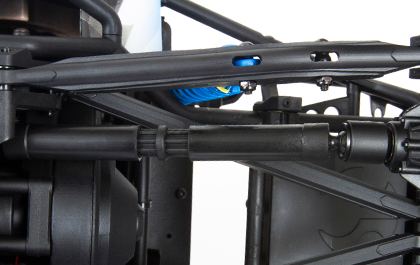 The WB8 HD driveshafts feature an updated design with a larger diameter cross pin (2x11mm) along with an M4 Screw Shaft (2mm hex drive) for added strength. A center splined slider floats between each end and features added material that reduces flex and fatigue. 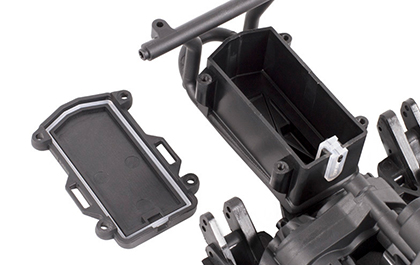 The water resistant receiver box uses three different silicone seals: one for the antenna, one for the servo wires (with three slots for three channels),and one that acts as a gasket for the receiver box cover. No more stress when running in mud, water, or snow! 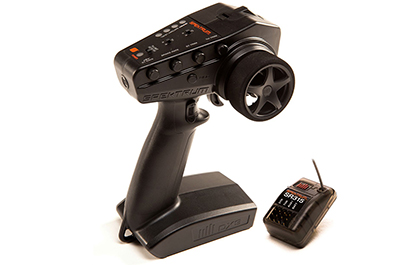 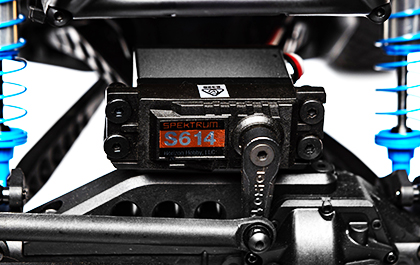 The Spektrum™ 15kg waterproof metal gear servo provides strong, reliable steering and lets you run in any conditions, rain or shine. Metal gears and a metal servo horn give it extra strength to withstand the abuse crawlers put on a servo. 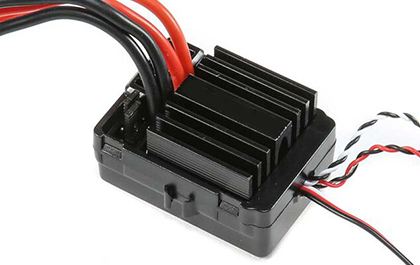 The 3S LiPo capable AE-5L ESC with IC3™ connectors features an adjustable drag brake and a light controller with dual LED outputs for headlights and taillights. 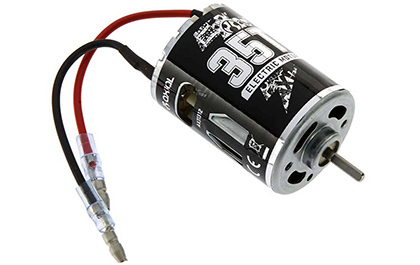 The easy-to-operate Brushed 35T motor delivers strength and reliability. It comes plugged in and ready tear up the terrain, be it flat-out desert, rocky roads or crawling. 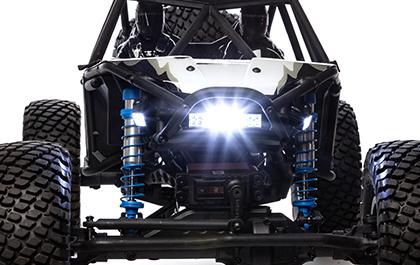 LED lights are ready for wheeling after the sun sets. There are two white LEDs on a forward-facing light bar and two more white LEDs on front for rock lights. The rear racing-style light bar includes two red LEDs.